In my last post, I highlighted an innovative program in Toronto which brings a mobile produce market to communities who lack access to affordable and healthy food. In an effort to address healthy food access in similarly underserved neighborhoods across the US, some community residents have literally taken action into their own hands by transforming underutilized and sometimes unlikely patches of land into “guerrilla” gardens.

Trees, wildflowers, herbs, fruits and vegetables pop up in vacant lots, alleys, tree pits and even parkways (the planted strip of land between the curb and the sidewalk), providing aesthetic value, helping to oxygenated the air and clean the soil, as well as providing families with an opportunity for healthy eating. Parkways are often owned by a city but the responsibility for maintenance falls on the adjacent homeowner. These spaces have a lot of potential for urban gardening because they are right outside of a house or apartment building and are a manageable size. Some parkways go ignored, some become planted, and others become community resources.

In 2010, gardener and activist Ron Finley co-founded LA Green Grounds, a group who plants and tends gardens created in parkways and other underutilized spaces with the hope of creating a food and health revolution in underserved South Los Angeles. In 2013, Mr. Finely gave a TED Talk (above) where he discussed the inspiration for the parkway garden he created in front of his home. Mr. Finley, who grew up in South Los Angeles and raised his children there, asked the audience, “…I was wondering, how would you feel if you had no access to healthy food, if every time you walk out your door you see the ill effects that the present food system has on your neighborhood? I see wheelchairs bought and sold like used cars. I see dialysis centers popping up like Starbucks. And I figured, this has to stop. So I figured that the problem is the solution. Food is the problem and food is the solution. Plus I got tired of driving 45 minutes round trip to get an apple that wasn’t impregnated with pesticides.”

Prior to a 2013 amendment to the City’s “Residential Parkway Landscaping Guidelines”, it was illegal to plant fruits and vegetables in parkways, but due to the activism of Mr. Finley and many others, the LA City Council decided to make an exception for vegetable gardening. While this news was a step in the right direction for urban gardeners and community health advocates, the permit to plant anything other than grasses and certain shrubs, still carried a cost-prohibitive $400 price tag. But just this week, the LA City Council voted to waive the $400 fee for parkway gardens (excluding fruit trees). The City Council will still have to define the parameters of the law (regulating garden height and addressing concerns such as safe passage for pedestrians) and the ordinance will be subject to final Mayoral approval, but waiving the fee will be a significant win for advocates and paves the way to increase the opportunity for residents to bring fruits and vegetables in to their neighborhoods without the worry of fines hanging over their heads.

My Finley says: “I have witnessed my garden become a tool for the education, a tool for the transformation of my neighborhood. To change the community, you have to change the composition of the soil. We are the soil. You’d be surprised how kids are affected by this. Gardening is the most therapeutic and defiant act you can do, especially in the inner city. Plus you get strawberries.”

Ron Finley in front of his planted parkway. Via ronfinley.com

South Los Angeles is a 50-square-mile area within the city of LA with a lot of strengths and a lot of challenges. Many residents of this community are underserved, which means in part that they have little access to green space, safe recreational opportunities or healthy and affordable eating options. As a result, many community members struggle with obesity, heart disease and other health-related conditions in percentages disproportionate to other areas of LA with better access to resources conducive to community health. As is the case in many underserved communities, sometimes creative solutions meet opportunity and the results can be transformative.

Zumba, the Latin dance-inspired exercise craze began in Colombia in the 1990’s by Alberto “Beto” Perez. As the popularity of these classes grew internationally, the demand for Zumba teaching certifications also grew, and in response, Perez created a one-day long workshop for aspiring teachers. In the last few years almost 40 Zumba studios have found their way in to unlikely places such as parking lots, beauty parlors, swap meets, and storefronts, allowing residents to take advantage of more conveniently located exercise opportunities creatively housed in their neighborhood.

Eduardo Torijan and his wife Santa opened a studio in South LA five years ago. “We want to see people healthy and well,” he said. “That’s our goal. It’s helping people who are overweight to survive, to combat illness and know that there’s a place here for them.” 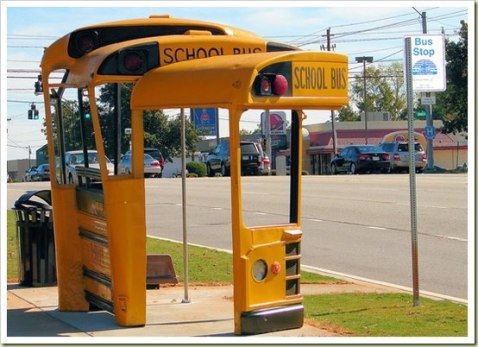 Artist Christopher Fennell created this bus stop (made from three separate school buses from the 60’s and 70’s) as an art installation in Athens, GA.  Not only does the piece add some playfulness to a wide, car-dominated boulevard, it provides shade for those waiting for the bus, making waiting a more comfortable experience.
August 22, 2012

Beneath the High Line

Today, the New York Times had a great opinion piece by Jeremiah Moss titled Disney World on the Hudson: In the Shadows of the High Line.

The High Line is a public park built on top of a former elevated train line and currently runs through The Meatpacking District, West Chelsea and Clinton/Hell’s Kitchen neighborhoods of Manhattan. The elevated track was built in the 1930’s carrying meat and other goods into The Meatpacking District but the last train powered through in 1980. After sitting abandoned and overgrown for decades, the track was slated for demolition but two community residents had greater ambitions for the space  and they started the Friends of the High Line organization garnering support for the reuse of the space as a public park. The High Line park, which opened in 2009, is often looked at as a model reuse project and has been equally adored and despised residents, urban planners and national and international visitors. 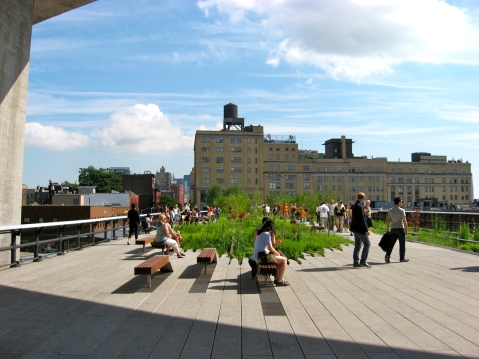 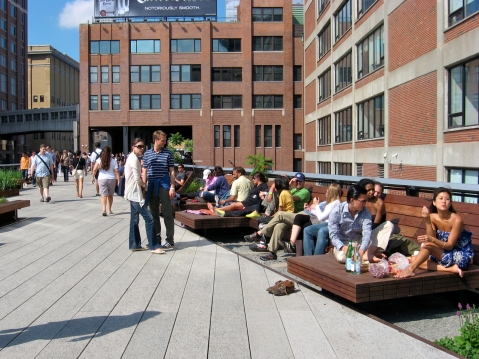 For me, the High Line is an innovative and unique reuse project, but one that also embodies exclusivity. The 1.45-mile-long park is located in a mostly swanky area of Manhattan, surrounded by chic shops and restaurants, expensive food trucks and sits literally high above the street (which can be an issue when elevated spaces can feel unwelcoming and exclusive). The park is accessible to some visitors by mulitiple stairways and less-abled visitors (or those encumbered with strollers for example) can access the long and winding park by select elevators. But those with any impairment or any sort of carriage must be careful not to trip over raised concrete design features that surround the planted areas embedded in the concrete surface of the park.

The Friends of High Line board boasts a few high-profile celebrities who live or work near the park (the website features a history of the High Line video narrated by the actor Ethan Hawke) and had managed to create such a buzz about the space that on opening day there was a line of people wrapped around the block, waiting (after they obtained an official wrist band) to explore this new “public” space, a handful at a time.

Waiting in line for the High Line on opening weekend. Photo by Anna Peccianti

Many other cities around the country have looked to the High Line as a model of an innovative reuse project than can attract a lot of locals and tourists to a neighborhood but it may be important for them to take a closer look. Mr. Moss writes that the park “has become a tourist-clogged catwalk and a catalyst for some of the most rapid gentrification in the city’s history.”

Mr. Moss points out that according to the Friends of the High Line website, 3.7 million people paid a visit to the High Line last year and only half of them were New Yorkers. He says that the appeal of a new tourist attraction is changing the neighborhood as high-rise apartment buildings are being constructed, local business like auto shops and small diners are losing their customers and being forced to close. According to Mr. Moss, property values near the structure have increased by 103% between 2003-2011.
As so often happens with gentrification, Mr. Moss fears that any remaining diversity of “regular New Yorkers” will soon vanish. He writes:”Within a few years, the ecosystem disrupted by the High Line will find a new equilibrium. The aquarium-like high rises will be for the elite, along with a few exclusive locals like the Standard Hotel. But the new locals will rarely be found at street level, where chain stores and tourist-friendly restaurants will cater to the crowds of passers-by and passers-through. Gone entirely will be regular New Yorkers, the people who used to call the neighborhood home. But then the High Line was never really about them.”
June 28, 2012

According to the New York Times, more than 130 former Walmart stores are vacant and available for purchase or lease across the country. With many big box stores and malls closing, we have the opportunity to think of ways to reuse these structures instead of letting them sit abandoned, open to negative activity.

In McAllen, Texas, the city transformed a former Walmart (the size of two and a half football fields) into a contemporary library filled the space with innovative amenities like an art gallery, cafe, used book store, an auditorium, meeting rooms with audiovisual services and electronic classrooms.

The new library is an upgrade from the city’s former library and has drawn a large number of people (about 62,000 people came to the library in July, up from 28,000 visitors this time last year) but some have criticized the library for being outside of the city center and I could not tell from the website if it was accessible by public transportation.

How would you transform a former big box store? What would you do with all that space?!? I’d love to do a workshop with children and hear what kind of imaginative ideas they’d have for a building that size. Water slides? Roller coasters? Skateboarding park? Petting zoo? The possibilities are endless.